The Residence of Orthodox bishops in Stańków

In 1848, an abode of the forest shooter (gamekeeper) was placed in Stańków. Some adequate buildings were constructed for him, too. In 1890, thanks to the efforts of the Orthodox Bishop from Chelm the buildings transferred to the summer residence of bishops.
After rebuilding the facility, a residence surrounded by a garden and an orchard was established there. An area of almost 22 hectares was separated by a forest in the eastern side, devastated after World War II.
After World War I, a forestry management abode was established here, and now it is a gamekeeper’s cottage. Today, only a residential building, a brick barn and a part of a garden with an area of 1.8 hectares remained from the old complex. The hornbeam alley, the black locust alley and semicircular row of passage preserved, surrounding the existing former Orthodox church. There is approx. 150 trees, mainly hornbeams (99 pieces), oaks (19 pieces), black locusts (9 pieces), lindens (6 pieces) and European larches (6 pieces). There are also: maples, thujas occidentalis, Eastern white pines (2 pieces), chestnuts, European spruces, Scots pines, alders and bird cherries. Three European larches, of the circuits 253, 257 and 258 cm were taken under monumental protection in 1989. 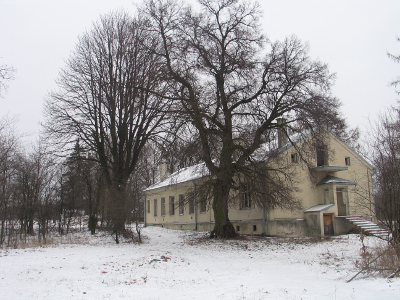 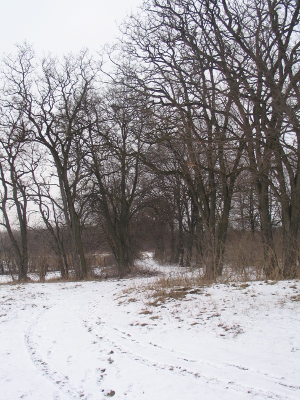